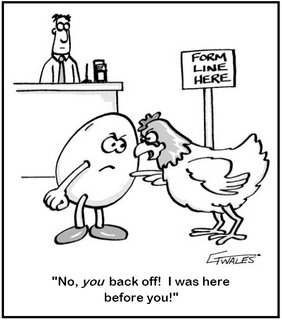 Regarding the survey, “Which came first, the chicken or the egg?” following are some responses:

From the evolutionist: “Well, the egg. But it wasn’t a chicken egg. It was a dinosaur egg. One day, there was a genetic scramble and a chicken hatched in the middle of a nest of dinosaur eggs. Thank God, I mean…statistically, we were fortunate that it was hatched among the non-carnivorous group of dinosaurs and that it was a rather impressively large creation (no scratch that), er, a large…conception, at first, who could run like a chicken with its head cut off. Otherwise, it might not have reproduced with other genetically mutated dinosaurs to form smaller chicken, and we humans might’ve eventually been served up on its platter. Hey, that’s how survival of the fittest goes, you know. I mean, if I’d had my choice, it would’ve been a four-legged mutation, to keep the arguments down at family dinnertime.”

From the creationist: “Well, everybody knows the chicken came first. It was, after all, created. How do I know it wasn’t created from an egg? Well, how much sense would that have made for a chicken to have come out of an egg? Oh, well, okay, they do…NOW. But not the first chicken. I don’t know. Maybe it came from a rib too, or dust. God only knows. For heaven’s sakes, go read your bible. No, I don’t know why God didn’t create a four-legged chicken, but come to think of it, it would’ve caused a lot less problems at our family dinner table.”

From the café chef: “Which comes first? Well, the egg, of course. I serve those up on our breakfast platters. Chicken is our lunch special.”

From the Rabbinic Jew: “That’s why I can’t eat at that café down the street. It’s not kosher. There might still be some leftover egg on the plate when they serve up that chicken. And tell that creationist that ribs and chicken shouldn’t be served up together either.”

From the vegan: well, there wasn’t an actual verbal response – just a disgusted look

From the comedian: “Hey, do you know why the chicken crossed the road? Well, apparently, it didn’t. It couldn’t make up its tiny bird brain which side of the issue it should take, so it vacillated back and forth until a Mack truck came along and it didn’t have the sense to know to step to one side or the other to get out of the way. The possum tried to retrieve the chicken from the middle of the road, but along came another truck. So, I can tell you, without hesitation, the dead chicken came before the dead possum. They both looked like scrambled eggs.”

From the Kindergartner: “If God made a boy named Adam before he made a girl named Eve, he must’ve figured it was only fair to make the girl chicken before the boy chicken, since boy chickens don’t lay eggs.”

Research surveyor to himself: “Crap, now I have a new research question.” Furiously scribbles on paper, “Where did boy chicken come from?”

When my son comes off the lake this evening from his fishing tournament, he’ll be faced with writing a paper on Creation versus Evolution. Let me start by saying, as I have in past posts, that I am a Christ-follower. With that being said, some of you just smugly nodded to yourselves and said, “We know which direction this paper is going.” Let me raise the ante and tell you the paper is being written for a Christian biology teacher. Huh.

But I’m also a researcher of sorts with a biological twist of curiosity to my background. And let me say that nothing irritates me more (except maybe poison ivy or shingles) than science or religion, either one, spouting that either has definitive answers to anything. The Bible is neither a pure historical and certainly not a scientific explanation of the past. It is an accounting of faith beliefs that has some history mixed within it from very specific experiential perspectives. (That means it has bias – oh, and some poetry too!) And science is not science when it claims to have proof of anything. (Most hypotheses begin in trying to prove something, which is why it’s necessary to be specific in formulating a null hypothesis for comparison.) Science is about discovery and gathering evidence in an attempt to understand. Science and religion went hand in hand for many centuries, though admittedly flawed in many aspects, as we’ve come to better understand components of our world. If flawed then, why not flawed now? Would it not be better to continue on in our self- and societal- discoveries, based on what evidence we’ve gathered, admitting we continue to have biases and some things will likely never be resolved on this side of heaven? (Oh! There was one of those biases right there – out of my own mouth!)

Would further understanding remove the ability to have faith? Does faith threaten knowledge? If the answer to either of these questions is yes, then we need to engage in further self-examination and try to answer the question “why?” before we proceed in arguments that achieve nothing to further anything in us but division.

I won’t be helping my son with his paper tonight, most especially by inserting my opinion. This is another page to turn in both his personal scientific discovery and his personal faith journey. In any case, he will be giving thought to something that continues to stump some of the most brilliant minds (perhaps the ones who haven’t quite opened themselves to consider a third possibility).

So let me end light-heartedly, with a joke that probably a Christ-follower nor a scientist should ever be caught dead telling. Good thing I’m alive…(and this,um, is actually from my comedian in the survey):

The chicken and the egg had just engaged in very personal relations. The chicken was lying back on the bed with a very satisfied look on her face, smoking a cigarette. With an extremely dissatisfied scowl, the egg grumbled, “Well, I guess that answers that question.”

By all means, ask questions. And ask them heartily. But do so with an open mind and open heart…for this continued rhetoric, with the wrong purpose, is only going to leave both sides feeling as dissatisfied as the egg (or, at the very least, with egg on our faces).

13 thoughts on “Chicken or Egg Debate…it cracks & cackles on” 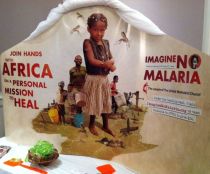